Selections from Gandhiji's writings and speeches to explain his view on Swadeshi/Khadi. 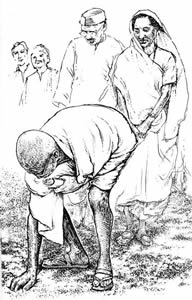 There is no salvation for us without true Swadeshi, not the Swadeshi which can be conveniently put off. Swadeshi, for me, has a deeper meaning. I would like us to apply it in our religious, political and economic life. It is not, therefore, merely confined to wearing on occasions a Swadeshi cloth. That we have to do for all time, not out of a spirit of jealousy or revenge but because it is a duty we owe to our dear country. We commit a breach of the Swadeshi spirit certainly if we wear foreign-made cloth, but we do so also if we adopt the foreign cut. Surely, the style of our dress has some correspondence with our environment. In elegance and tastefulness, it is immeasurably superior to the trousers and the jacket. An Indian, wearing a shirt flowing over his pyjamas with a waist-coat on it without a neck-tie and its flaps hanging loose behind, is not a very graceful spectacle.

Swadeshi in religion teaches one to measure the glorious past and re-enact it in the present generation. The pandemonium that is going on in Europe shows that modern civilization represents forces of evil and darkness, whereas the ancient, i.e., Indian civilization, represents in its essence the divine force. Modern civilization is chiefly materialistic, as ours is chiefly spiritual. Modern civilization occupies itself in the investigation of the laws of matter and employs the human ingenuity in inventing or discovering means of production and weapons of destruction, ours is chiefly occupied in exploring spiritual laws. Our Shastras lay down unequivocally that a proper observance of truth, chastity, scrupulous regard for all life, abstention from coveting others' possessions and refusal to hoard anything but what is necessary for our daily wants is indispensable for a right life, that without it a knowledge of the Divine Element is an impossibility. Our civilization tells us with daring certainty that a proper and perfect cultivation of the quality of Ahimsa which, in its active form means purest love and pity, brings the whole world to our feet. The author of this discovery gives a wealth of illustration which carries conviction with it.

It should be remembered that in practicing Ahimsa, there need not be any reciprocation though, as a matter of fact, in its final stages it commands reciprocation. Many of us believe, and I am one of them, that through our civilization we have a message to deliver to the world. This Swadeshi is to be considered as a very active force to be ceaselessly employed with an ever-increasing vigilance, searching self-examination. It is not meant for the lazy, but it is essentially meant for them who would gladly lay down their lives for the sake of Truth. It is possible to dilate upon several other phases of Swadeshi, but I think I have said enough to enable you to understand what I mean.