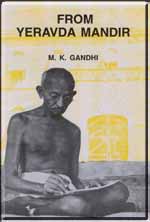 I would like to say to the diligent reader of my writings and to others who are interested in them that I am not at all concerned with appearing to be consistent. In my search after Truth I have discarded many ideas and learnt many new things. Old as I am in age, I have no feeling that I have ceased to grow inwardly or that my growth will stop at the dissolution of the flesh. What I am concerned with is my readiness to obey the call of Truth, my God, from moment to moment, and therefore, when anybody finds any inconsistency between any two writings of mine, if he has still faith in my sanity, he would do well to choose the later of the two on the same subject.

During my incarceration in 1930 in the Yeravda Central Prison, I wrote weekly letters to the Satyagraha Ashram, containing a cursory examination of the principal Ashram observances. As the Ashram influence had already traveled beyond its geographical limits, copies of the letters were multiplied for distribution. They were written in Gujarati. There was a demand for translation into Hindi or other Indian languages, and also into English. Shri Valji Desai gave a fairly full translation in English. But seeing me in possession of comparative leisure during the recurrent incarceration, he has sent me his translation for revision. I have gone through it carefully, and touched up several passages to bring out my meaning more to my liking. I need hardly add, that if I was writing anew for the English reader, perhaps I should write a wholly new thing. But that would be going beyond my commission. And perhaps it is as well, that even the English reader has the trend of my thought as expressed to the inmates of the Ashram, and in the year 1930. I have therefore taken the least liberty with the original argument.