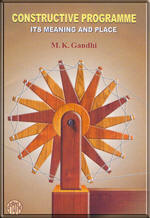 *Khadi* is a controversial subject. Many people think that in advocating *Khadi* I am sailing against a headwind and am sure to sink the ship of Swaraj and that I am taking the country to the dark ages. I do not propose to argue the case for *Khadi* in this brief survey. I have argued it sufficiently elsewhere. Here I want to show what every Congressman, and for that matter every Indian, can do to advance the cause of *Khadi*. It connotes the beginning of economic freedom and equality of all in the country. "The proof of the pudding is in the eating." Let everyone try, and he or she will find out for himself or herself the truth of what I am saying. *Khadi* must be taken with all its implications. It means a wholesale Swadeshi mentality, a determination to find all the necessaries of life in india and that too through the labour and intellect of the villagers. That means a reversal of the existing process. That is to say that, instead of half a dozen cities of India and Great Britain living on the exploitation and the ruin of the 7,00,000 villages of India, the latter will be largely self-contained, and will voluntarily serve the cities of
India and even the outside world in so far as it benefits both the parties.
This needs a revolutionary change in the mentality and tastes of many. Easy though the non-violent way is in many respects, it is very difficult in many others. It vitally touches the life of every single Indian, makes him feel aglow with the possession of a power that has lain hidden within himself, and makes him proud of his identity with every drop of the ocean of Indian humanity. This non-violence is not the inanity for which we have mistaken it through all these long ages; it is the most potent force as yet known to mankind and on which its very existence is dependent. It is that force which I have tried to present to the Congress and through it to the world. *Khadi* to me is the symbol of unity of Indian humanity, of its economic freedom and equality and, therefore, ultimately, in the poetic expression of Jawaharlal Nehru, "the livery of India's freedom".