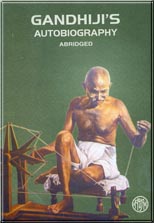 I would like to say to the diligent reader of my writings and to others who are interested in them that I am not at all concerned with appearing to be consistent. In my search after Truth I have discarded many ideas and learnt many new things. Old as I am in age, I have no feeling that I have ceased to grow inwardly or that my growth will stop at the dissolution of the flesh. What I am concerned, with is my readiness to obey the call of Truth, my God, from moment to moment, and, therefore, when anybody finds any inconsistency between any two writings of mine, if he has still faith in my sanity, lie would do well to choose the later of the two on the same subject.

Preface to the New Edition

In issuing this new edition of Hind Swaraj it may not be inappropriate to publish the following that I wrote in the Harijan in connection of the Hind Swaraj Special Number of the Aryan Path. Though Gandhiji's views as expressed in the first edition of Hind Swaraj have remained in substance unchanged,- they have gone through a necessary evolution. My article copied below throws some light on this evolution. The proof copy of this edition has been revised by numerous friends to whom I am deeply indebted.

Unique in its conception and beautifully successful1 in its execution is the Special Hind Swaraj Number of the Aryan Path. It owes its appearance mainly to the devoted labours of that gifted sister Shrimati Sophia Wadia who sent copies of Hind Swaraj (Indian Home Rule) to numerous friends abroad and invited the most prominent of them to express their views on the book. She had herself devoted special articles to the book and seen in it the hope for future India, but she wanted the European thinkers and writers to say that it had in it the potency to help even Europe out of its chaos, and therefore she thought of this plan. The result is remarkable. The special number contains articles by Professor Soddy, G. D. H. Cole, C. Delisle Burns, John Middleton Murry, J. D. Beresford, Hugh Fausset, Claude Houghton, Gerald Heard and Irene Rathbone. Some of these are of course well-known pacifists and socialists. One wonders what the number would have been like, if it had included in it articles by non-pacifist and non- socialist writers! The articles are so arranged "that adverse criticisms and objections raised in earlier articles are mostly answered in subsequent ones". But there are one or two criticisms which have been made practically by all the writers, and it would be worth while considering them here. There are certain things which it would be well to recognize at once. Thus Professor Soddy remarks that, having just returned from a visit to India, he saw little outwardly to suggest that the doctrine inculcated in the book had attained any considerable measure of success. That is quite true. Equally true is Mr G. D. H. Cole's remark that though Gandhiji is "as near as a man can be to Swaraj in a purely personal sense", "he has never solved, to his own satisfaction, the other problem - that of finding terms of collaboration that could span the gulf between man and man, between acting alone and helping others to act in accordance with their lights, which involves acting with them and as one of them - being at once one's self and someone else, someone one's self can and must regard and criticize and attempt to value." Also as John Middleton Murry says, "the efficacy of non-violence is quickly exhausted when used as a mere technique of political pressure", - when the question arises, 'Is non-violence fante de mieux, really non-violence at all?' But the whole process is one of endless evolution. In working for the end, man also works for perfecting the means. The principle of non-violence and love was enunciated by Buddha and Christ centuries ago. It has been applied through these centuries by individual people with success on small clear-cut issues. As it has been recognized, and as Gerald Heard has pointed out, "the world-wide and age-long interest of Mr. Gandhi's experiment lies in the fact that he has attempted to make the method work in what may be called the wholesale or national scale." The difficulties of that application are obvious, but Gandhiji trusts that they are not insurmountable. The experiment seemed impossible in India in 1921 and had to be abandoned, but what was then impossible became possible in 1930. Even now the question often arises: 'What is a non-violent means ?' It will take long practice to standardize the meaning and content of this term. But the means thereof is self-purification and more self-purification. What Western thinkers often lose sight of is that the fundamental condition of non-violence is love, and pure unselfish love is impossible without unsullied purity of mind and body.

The Attack on Machinery and Civilization

Limitations of the Doctrine

G. D. H. Cole has put the following poser: "Is it so when German and Italian airmen are massacring the Spanish people, when Japanese airmen are slaughtering thousands upon thousands in Chinese cities, when German armies have marched into Austria and are threatening to march into Czechoslovakia, when Abyssinia has been bloodily bombed into defeat ? Until two years or so ago, I believed myself opposed to war and death-dealing violence under all circumstances. But today, hating war, I would risk war to stop these horrors." How acute is the struggle within himself is apparent from the sentences that follow: "I would risk war; and yet, even now, that second self of mine shrinks back appalled at the thought of killing a man. Personally, I would much sooner die than kill. But may it not be my duty to try to kill rather than to die?
Gandhi might answer that no such dilemma could confront a man who had achieved his personal Swaraj. I do not claim to have achieved mine; but I am unconvinced that the dilemma would confront me, here and now in Western Europe, less disturbingly if I had."
Occasions like those Mr. Cole has mentioned test one's faith, but the answer has been given by Gandhiji more than once, though he has not completely achieved his Swaraj, for the simple reason that for him Swaraj is incomplete so long as his fellow-beings are bereft of it. But he lives in faith, and the faith in non-violence does not begin to shake at the mention of Italian or Japanese barbarities. For violence breeds the results of violence, and once you start the game there is no limit to be drawn. Philip Mumford in the War Resister has replied as follows to a Chinese friend urging action on behalf of China:
"Your enemy is the Japanese Government and not the Japanese peasants and soldiers - . unfortunate and uneducated people who do not even know why they are being asked to fight. Yet, if you use ordinary military methods of defending your country, it is these guiltless people who are not your real enemies whom you must kill. If only China would try and preserve herself by the non-violent tactics used by Gandhiji in India, tactics which are indeed far more in accordance with the teachings of her great religious leaders, she would, I venture to say, be far more successful than she will by copying the militarist methods of Europe.... Surely it is a lesson to mankind in general that the Chinese, the most pacific people on earth, have preserved themselves and their civilization for a longer period in history than any of the warlike races. Please do not think we do not honour those gallant Chinese who are fighting in defence of their country. We honour their sacrifice and recognize that they hold different principles from ourselves. None the less, we believe that killing is evil in all circumstances and out of it good cannot come. Pacifism will not spare you from all suffering, but in the long run, it is, I believe, a more effective weapon against the would-be conqueror than all your fighting forces; and what is most important, it will keep alive the ideals of your race."
Miss Irene Rathbone poses a similar question: "What human being on this earth, normal or saintlike, can endure that small boys and girls should perish if, by bowing to the tyrant and denying his own conscience, he can save them? That question Gandhi does not answer. He does not even pose it.... Christ is clearer.... Here are his words: 'But whoso shall offend one of these little ones, which believe in me, it were better that a millstone were hanged about his neck and that he were drowned in the depth of the sea'.... Christ is a greater help to us than Gandhi...." I do not think Christ's words express anything more than his wrath, and the action suggested is not by way of punishment to be imposed by another on the offender, but one to be imposed on himself by himself. And is Miss Rathbone sure that she can, by using what she supposes to be Christ's method, save the child? She is wrong in thinking that Gandhiji has not posed the question. He has posed it and answered it emphatically, as it was posed and answered in action by those immortal Muslim martyrs 1300 years ago who suffered women and children to die of hunger and thirst rather than bow to the tyrant and deny their own conscience. For, in bowing to the tyrant and denying your own conscience, you encourage the tyrant to, perpetrate further horrors.
But even Miss Irene Rathbone calls Hind Swaraj "an enormously powerful book", and says that by virtue of it she has found "myself forced by its tremendous honesty to search my own honesty. I would implore people to read it."
The Editors of the Aryan Path have done a distinct service to the cause of peace and non-violence by issuing their Hind Swaraj Special Number.